For Dentatus the participation at the Swedental Meeting in Stockholm 13th – 15th November was a great success and it was a pleasure meeting new people within the dental business as well as gave us the opportunity to make new business acquaintances.

Apart from having our own booth we had the pleasure to co-exhibit together with our Swedish distributor AB Nordenta. 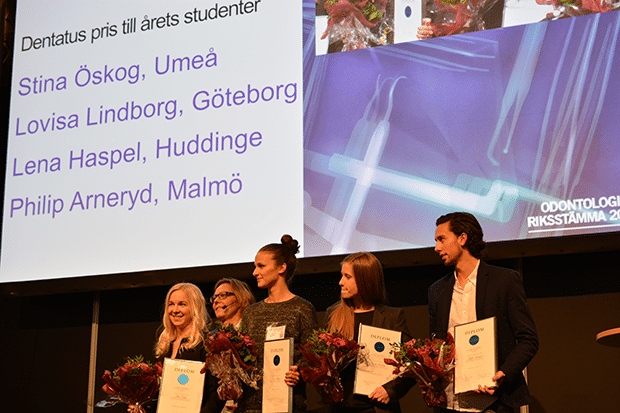 On 13th November the Dentatus Prize winners were awarded by the Swedish Dental Society and distributed to the best student at each one of the four Dental Universities in Sweden. The prize, sponsored by Dentatus AB, was given to the student who had shown “good clinical skills and empathy in patient relations” and had been nominated by each faculty. The winners received a diploma and a scholarship, apart from the honour. The prize winners were:

Lena Haspel at Institute of Odontology, Karolinska Intsitute in Stockholm

Philip Arneryd at Institute of Odontology, University of Malmö

Lovisa Lindborg at Institute of Odontology, University of Gothenburg

Stina Öskog at Institute of Odontology, University of Umeå

WE ARE PLEASED TO LAUNCH OUR NEW REVISED PRODUCT CATALOGUE!

As we celebrate another year together, we’d like to say “Thank You” for your continued support and dedication to the Dentatus brand during this past year. We extend our best wishes for a new year full of joy, peace, health and prosperity.

Freja Håkansson from University of Gothenburg, Hanna Dahl from Malmö University, Linda Liljeblad from Karolinska Institutet and Evelina Svanelind from Umeå University have received the title of the best dental student and they will be awarded at this year’s Swedish Dental Exhibition – Odont...

The 0.04 mm Dentatus Matrix Bands Special Class V are made of high quality stainless steel and provide very good prerequisites for well contoured and defined interproximal contacts. Dentatus quality has proven to be highly regarded by users all over the world for a long period of time.

Contact your Dentatus dealer today or email us at: info@dentatus.se

As the COVID-19 pandemic continues, National Health Agencies across the globe are advising dental offices to resume seeing non-emergency patients and minimize AGP (Aerosol Generating Procedures). This is causing much debate around traditional scaling and air abrasion tec...

DENTATUS ARTICULATORS are designed to fulfill the requirements for efficient and accurate study of occlusal relations, diagnosis and treatment planning to aid in producing quality restorations.

In the article “Why I use… Profin” from Dental Product Shopper, Dr. Matt A. Nejad, DDS shares his experience of working with Dentatus’s Profin reciprocating system. Read more here.

Dental Tribune republished this article on their website and you can read it here.

Did you know that the above BEFORE and AFTER effect can be achieved by the Dentatus Lamineer Tips type LTA?

To remove interdental overhangs with standard rotating instruments can be difficult.


Go to the archive

Thank you for contacting us at Dentatus, we will be in touch as soon as possible!